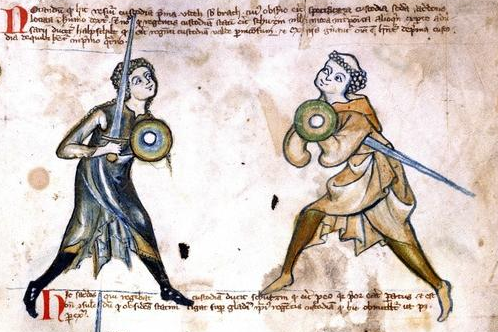 Fencing with sword and buckler (a small shield) is older than that with the longsword and was a common part of the sword arts of the time. The training at MHFS is based on the oldest surviving manual for sword and buckler fencing, the German I.33. The manual mainly depicts two fencers called the priest (sacredos) and the scholar or pupil (scolaris). It is also completely unique in that a woman named Walpurgis, probably a saint with the same name, fences against the priest on several pages.

The fencing consists of using both the sword and buckler to stop your opponent while at the same time trying to find an opening to attack through. The buckler is also a weapon that can be used to both strike with or to hold your opponent with. Both the sword and the buckler can be quickly manoeuvred independently, but it takes a lot of practice to coordinate both defence and attack without getting in your own way. One of the most important parts in the manual are the guards (custodie) and number of defences (obsessiones) to counter the most common attacks from the guards.

The sword and bucker are capable of strong attacks and can easily cause injuries if treated without proper respect. To take part in full contact sparing a complete set of safety equipment is needed. Precision and control is a must when using the sword and buckler.

Below you can find links to more information that you need to safely train with sword and buckler.